Waterfall Flaps Strip is one of Moc Chau landscapes. From the center of Moc Chau, Son La to go down to the, to the junction of Long Sap border gate, then turn. From here, the road separated from Highway 6, about 5km away is coming. 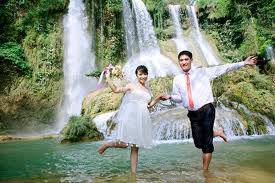 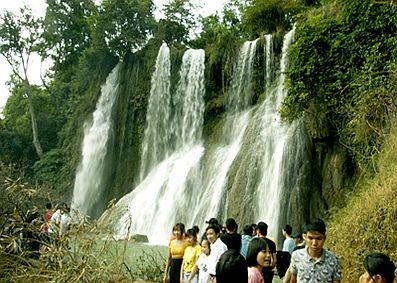 Waterfall Flaps best Strip in April to September every year, by this time more water volume, the entire screen is 70m wide cascade of white water, just recently poetic grandeur. From a distance, like a waterfall "strip affection" casual connection between heaven and earth.

To the waterfall, you have to walk through the sparse forests. Sugar has been easy to go over, not to cow down streams such scene a few years ago. Small concrete all the way, I heard a loud rumbling distant waterfall. Down some stairs, around the bend, open space in front of the falls from above and silk soft as down river.

"Strip Flaps" in height approximately 100 m, divided into two branches, one party to 9 floors, a 5-storey side, two operators are separated by about 200m. Cascade is not strong and many countries, like the name suggests, sparkling soft waterfall in the sun.

Hot summer noon, stopping the flow of cooling water cascade Flaps Strip, it's interesting. Many young people in the region and elsewhere to find the tour operators. They also brought the food, find a cool place under the trees, picnic fun.