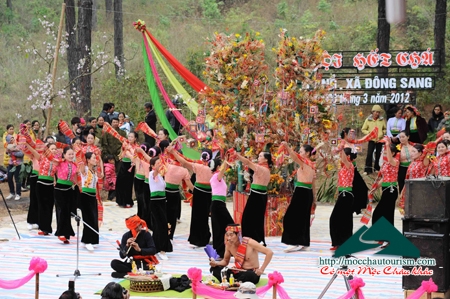 Het Cha Festival thrive only from 1963 onwards, after the destructive war in the North of American empire, the entire nation overall manpower for the war and nation building, the time space shuttle fleet included, the artisan class lost and Het Cha festival also forgotten.

Mr Xuyen is directly served Het Cha festival many years ago so he can deep understanding of the origin and the birth of Het Cha festival. From his long simmering idea recover because he saw the festival itself has deep meaning, humane, educational, is a form of cultural activities meaningful community involvement. Mr Xuyen confided "When I see on TV, it was introduced to the festival of their people, I am thinking of Het Cha festival is equally distinctive, and partly because I love it, want it to exist forever. Reconstruction was difficult, to preserve and promote it even more difficult, so I have a dream for many people who want to promote the festival known for its traditional version is not eroded over the years. "

Since the beginning of 2005 committees, administration of Ang village met and researched Resolution collect and restore Cha Out festival, which is assigned to the Assembly of the elderly. Mr Xuyen was handed by government committee about the task of collecting, restoring, the director of team xoe in Het Cha Festival.

After a period of studied collectibles and preparation, late 2005's Cha Xoe team was formed after the training period. By the end of April 2006 they performed Het Cha festival served people in and out of village and so far maintained regularly.

Het Cha Festival includes two parts: Ceremony and Conference section, this is a way have festival farewell to spring to prepare to enter the new crop production in achieving good results.

According to Mr Xuyen and village elders in the village to recount, the ancient, the Thais are very poor, no money to buy medicines, often by witchdoctors. The sorcerer has 3 system, the "Mo Ditch" specialized offerings in village, offerings for good weather visualization, peaceful village, the "Mo Temple" specialist offering hospitality joy, farewell to the dead and the "Mo Mun" teacher offering treatment to people and getting them adopted after cure.

Tips used by witchdoctors to have medicinal cure for the villagers, obliging witchdoctors, many people would like to be adopted by him. And then, every end of the year (at 29, 30 Year), descendants back to thank witchdoctors, but this time for the New Year is busy fixing up the oracles Thanksgiving will be held in March each year Het Cha Festival  ... from which have. Het Cha Festival held on March 23 to 26 each year

Mr Luong Van So, The Secretary of Ang village 1, said: "The festival of Het Cha festival I've forgotten, but thanks to the attention of the committee, the government and the enthusiasm want resurrection festival his Trans festival which again is maintained Cha, a form of cultural activities deeply spiritual, the festival is to unite the community, and help each other overcome difficulties in life, I feel proud because of their ethnic identity was revived in the younger generation now. "

Part celebration deeply humane man among men, is expressed in the lyrics of the poem (Khặp Chá do Khặn) Sing Cha: Đáy kịn sớ nha lưu thú – đáy dú nha lúm công lưm khun. That means, Do not forget chopsticks be eaten - do not forget favor to be in  (who helped her in sickness). Het Cha also offers cultural beauty of Conduct love couple, this is an opportunity to (Báo Sạo Chá) boys and girls learn together.

Note: The above article reprinted at the website or other media sources not specify the source https://mocchautourism.com is copyright infringement
Tags: in the, of the, here, in son, la province, chau district, we come, to moc, cool air, highlands perhaps, little place, to feel, the seasons, move in
Tweet